The main goal of this project is to orient you to what CS 24 will be like. It will also cover representation, use number bases, and review pointers.

The open-ended questions in this document are part of your grade on this project. Make sure to answer them and submit using the button at the bottom!!! You may submit as many times as you want. Your responses should be automatically saved locally if you click out of the box.

The lint test is also part of your grade. If you are not passing the lint test, you will lose at least 10 points on the project.

First, you should register for the assignment by going to https://grinch.caltech.edu/register which will create you a repository on gitlab with the starter code. Then, you should follow the

to get ready for the course. These shouldn’t take that long, but they’re extremely important.

Adam accidentally deleted the contents of their USB drive (oh noes!). This USB drive was particularly important, because Adam painstakingly created a unique welcome PDF for every student. He even went to the trouble of password protecting them; so, that nobody could read someone else’s message. Unfortunately, he lost the passwords too, because they were stored on the USB drive as well.

You will recover your CS 24 “welcome PDF” and the password to open it from an image of Adam’s USB drive step-by-step. There might also be other hidden goodies that were on the drive that are worth exploring…

In this course, we will often find ourselves working with recursive tree structures with multiple “types” of nodes. One example of such a tree is the directory tree on your file system. A node is either a file node or a directory node. File nodes contain a name, a file size, and a byte array of contents. Directory nodes contain a name and an array of children. Notably, the name is common to both types of nodes; so, it should appear in the “super class”. Unfortunately, C doesn’t have objects; so, we have to simulate them using a “tag” to keep track of what type the node is. These tags are usually implement as enums which are just a way of specifying that a variable must be one of a list of choices:

Thus, our node_t struct will consist of a type and a name:

The interesting part is how the “subclasses” are implemented. We “embed” the root struct as the first element of the subclasses. This way, they will both start with the same members. So, if we are given a node_t, we can “extend” it to the right type by casting it. See the init functions in directory_tree.c or free_directory_tree for examples of what that looks like.

We have provided the following functions to help initialize and free tree nodes:

Your first task is to implement the functions to manipulate, print, and create a directory tree:

Task 1. Implement the three functions above as specified. Then, make the test target, and our tests for task 1 will run.

In this part, you will be working with an image of Adam’s USB drive.

First, download usb.dmg from the link above. Before you start trying to recover files, you should check that the files are actually deleted. To do this, you’ll have to mount the image as a disk. On OS X, you can just double-click it. On Linux, you should use mount. On Windows, you can see it using 7zip or you can download this program to actually mount it as a drive. Regardless of machine, you should notice that there aren’t any useful files on the drive. So, we’ll have to recover them the hard way!

Your computer organizes the files on your machine in a particular format called a “file system”. There are many formats (ntfs on windows and ext3 on linux are some of the most common), but one of the older formats which is used for cross-compatibility is called FAT (which stands for “File Allocation Table”). Adam’s USB drive used FAT16 because of the relatively small size. In this section, we will describe the basics of the FAT16 file system to give you enough information to recover Adam’s files.

When a file is deleted on a FAT16 file system, the contents are actually kept in place! All that changes is the first character of the filename which is set to 0xe5. This means we can recover the files even though we can’t see them in finder/explorer!

The image begins with some special sections as pictured below: 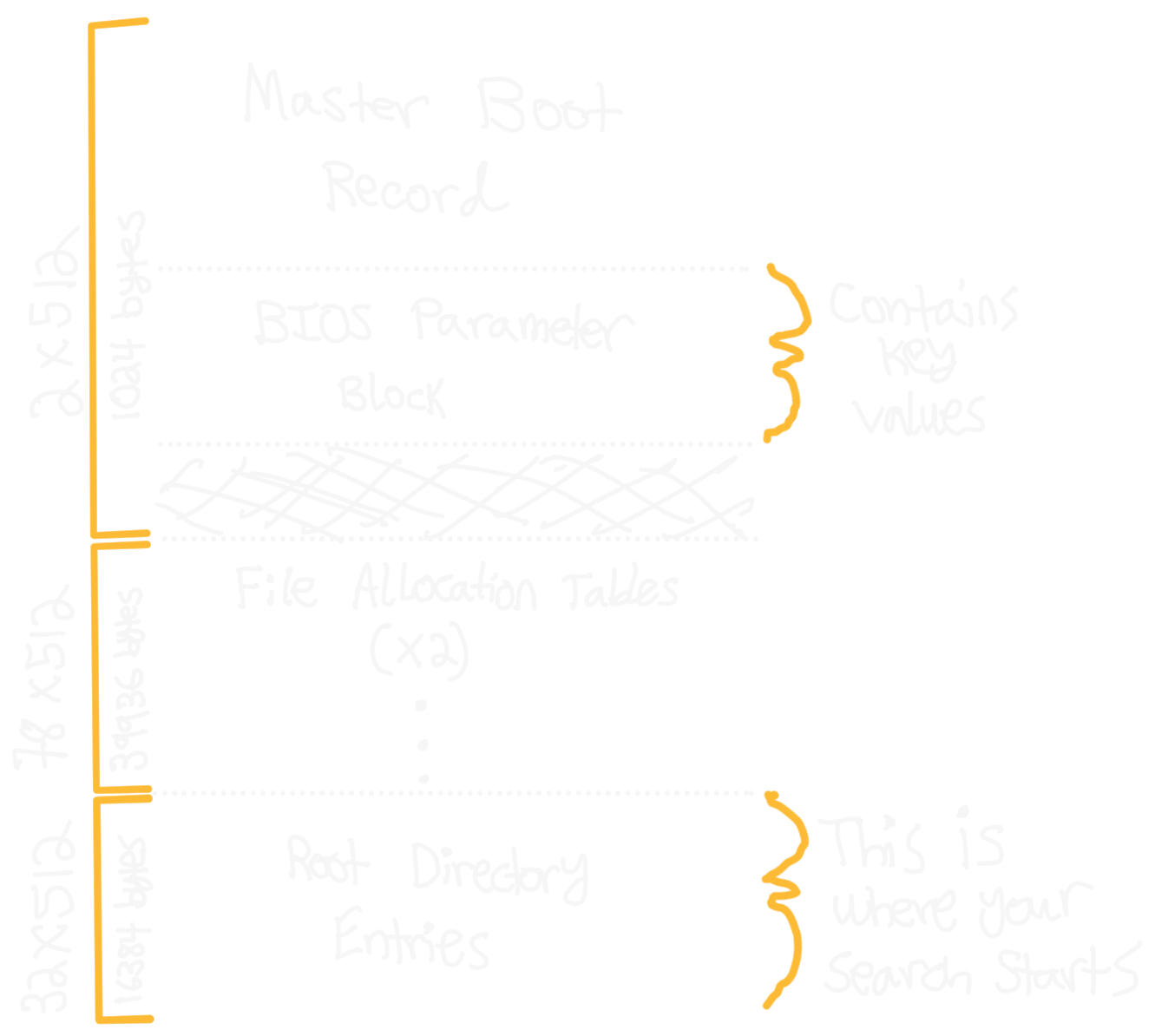 Since we’re not trying to boot from the disk image, we can ignore the first section. Since the files are deleted, we don’t care what the system thinks is allocated. So, the only two sections we care about in this “preamble” are: (1) the BPB and (2) the “root directory entries”. The BPB (represented by as a bios_parameter_block_t in fat16.h) stores a number of important parameters about the data that follows. For now, all you have to do is fread the bytes into a struct, and we will use the information contained inside later. The master boot record has size const size_t MASTER_BOOT_RECORD_SIZE = 0x20B as defined in recover.c.

Task 2. In recover.c, the starter code opens up a FILE * called disk. Internally, FILEs store the current offset in the file (which you can get with ftell) and fread, fseek, and fwrite change this pointer. Your job is to skip past the master boot record (by fseeking 0x20B bytes from the start), and fread the bios parameter block into the variable bpb. Note that bpb is NOT a pointer. Make sure the types match up in your call to fread. Then, skip past the padding and the file allocation tables directly to the beginning of the root directory entries block.

Notably, all directory_entry_t’s have a “cluster number” which is basically a pointer to a section on disk to get either the file contents or the files in the directory. You can get an offset (in bytes) from the beginning of the file by calling our utility function get_offset_from_cluster(d.first_cluster, bpb) which does a short calculation to determine where to go. Think of this as the ->next in a linked list.

The next several steps are to write the follow function, which recursively follows all non-hidden directories and constructs node_t’s out of them.

The FILE * disk points exactly to the directory_entry_t intended to be processed next.

For each file, if the file read is not hidden…

The loop should read and process directory_entry_t’s from disk until it finds one with a filename that starts with \0.

You will find the is_directory function useful in determining if an entry is a file or directory. In both cases, when we say “next location”, we mean the one pointed to by get_offset_from_cluster. In both cases, don’t forget to reset the location of the file to the next directory after you are done reading from the next location. Additionally, when you initialize the file/directory name, make sure to call the get_file_name function we’ve provided, because FAT16 stores file names weirdly.

Task 4. make recovery and run your code. The contents of the disk will be spilled into the ROOT folder. Find the directory containing your PDF and PASSWORD file. Open the PDF using the password you recovered, and follow the instructions inside to pass the gitlab tests. If you added the course late, there may not be a specific PDF labelled for you. If that is the case for you, contact Adam via Campuswire or E-mail.